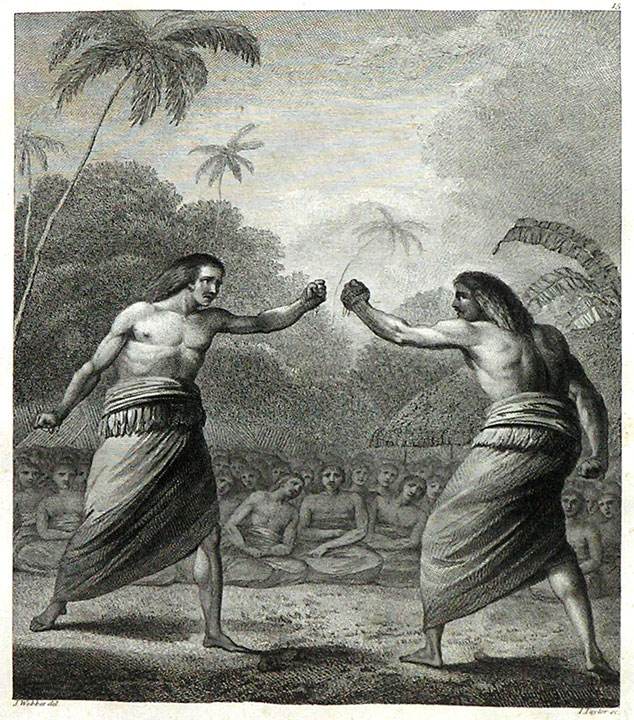 In ancient Hawaii, the fall harvest marked the start of the beloved Makahiki Festival. For three-to-four months, warfare was considered kapu (taboo) and the people of Hawaii filled their days with peace, festivities, feasting and games. 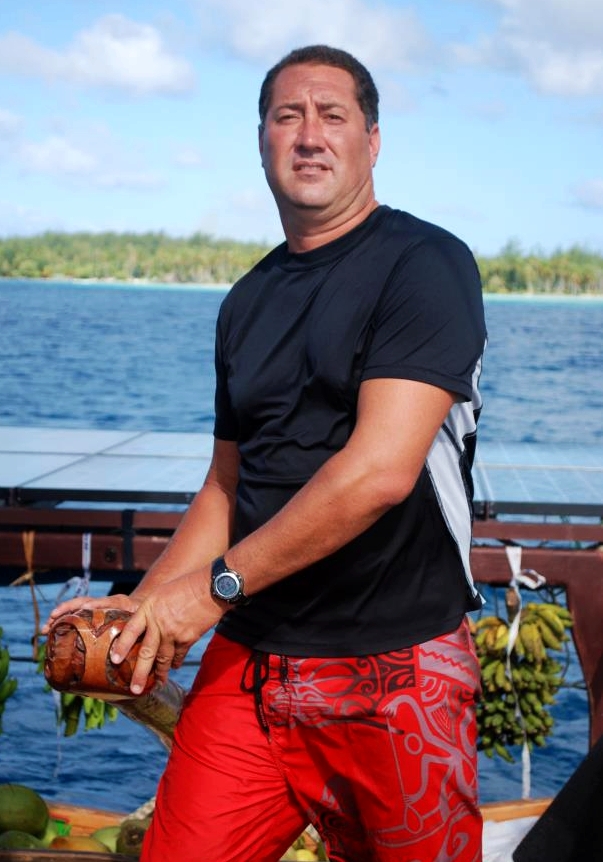 The games (numbering upwards of 150+) challenged participants in strength, wisdom, endurance and strategic thought. Some of the games attracted the Hawaiian youth, while others were reserved for the older generations – including numerous sexual activities that promoted fertility.

Paul “Hiapo” Hiapomalulani Elderts is a Southern California resident that dedicates his time to teaching others about Makahiki games at local festivals and other events. Below is an article written by Elderts on the history of Makahiki. Enjoy!

Makahiki season starts with the stars. A constellation or group of stars called Na hiku o Makali’i. In Greek, this constellation is known as Pleiades. Kahuna (Priests) with temples on the western side of each Hawaiian island would watch for the appearance of Makali’i that would appear at evening sky in October until around the end of January. When Kahuna could finally distinguish Makali’i in the eastern sky shortly after sunset, they announced that the next new moon should begin the Makahiki season, a time when warfare and most types of work were prohibited while the people celebrated with games and sports. On specific days the Kapu (religious laws) were no’a (relaxed) to allow people to farm or fish. This is the sound of the beginning of the Hawaiian New year.

When Na hiku o Makali’i appeared it was a time for Kanaka Maoli to honor their god Lono. Lono is the deity of the sky, clouds, thunder, lighting, rain, agriculture, harvest, peace, and fertility. Kanaka would show respect for Lono by not fighting this was a time for peace, reflection, games, festivals and planning for the new year, and presenting Ho’okupu (offerings) to his Ali’i (representative) of each island that would travel clockwise around the island holding Lono’s image to every ahupua’a collecting ho’okupu. Ho’okupu were resources that were important for survival. The image representing Lono-Makua (Father Lono) was re-made each year. It was a long pole with an image of Lono at the top and a crosspiece just below the image. From the crosspiece were hung banners of white kapa, feather lei and stuffed pelts of the Kaupu bird. This image was known as the long god of the makahiki because it took the long way around the island, traveling throughout the season. Ho’okupu offerings such as taro, pahi ai, sweet potatoes, coconut, chickens, dogs, pig, dried fish, fishing nets, there best fish, clothing, rope, feathers, feather lei, different plants and things needed for daily life were collected before arrival in the district.

Each ahupua’a would give those things it made for the Ali’i to store some of these offerings for the future in case of disasters like hurricanes or famine, but they re-distributed much for everyone to celebrate with at the feast. Like a Thanksgiving feast for the bounty of the land and sea. While more food was available, the games of fitness kept Kanaka’s from getting too heavy for risk of losing in battles. This focus on health and welfare made games of skill that tested a healthy body and mind a focal point of the Makahiki games. Makahiki was split into three different phases: Ho’okupu was considered the time to make offerings to the deity’s to pay tribute to them for the abundance in the previous year and to call upon them for a prosperous year to come. During the second phase HULA was then performed and is now a form of what it is today. Kanaka’s gathered for a celebration of dancing hula, feasting and playing games that tested physical and mental abilities. The third phase is Wa’auhau is the time to give offerings to insure for the New Year. Before entering the ahupua’a (district), Lono-Makua would be set up, as well as the akua Pa’ani, the deity of sports. Kahuna would be blindfolded while the kanaka maoli spent the next several days in sports and festival entertaining the people of the district, and work was forbidden. 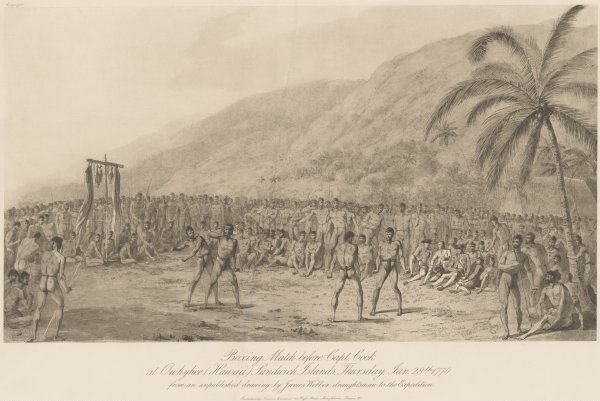 Games and sport have always been an integral part of Hawaiian life. In traditional society pa’ani kahiko (ancient games) were numerous and extremely popular. These games actually came to the forefront of everyday life during the yearly makahiki festival that spanned approximately three to four months. The time of makahiki meant the arrival of the deity Lono and the setting aside of the deity Ku. Warfare and other activities of Ku ceased and the land, and its inhabitants, was allowed to regenerate, procreate and grow anew. This was a time of Le’ale’a (pleasure) when many games and contests were held.

Some of these contests were not only used as arenas where the strong and swift could attain recognition and fame to step up in social classes, but they also served to train the many common folk who might need to be called upon later in battle. The more formal of these contests during the makahiki would take place at a designated kaua pa’ani (sporting area) with Lono makua watching over the contestants. Not only was a contestant being judged, but the glory or dishonor of the Ohana’s name was on the line. The victors of these contests were heralded throughout the islands. Many of the most heroic stories of the deities involve these battles of strength and speed.

For Lono the deity of peace Na Koa’s (warriors) had to stop fighting out of respect for him. But they would still have to stay fit so the games focused on skill and strength not only in physical sports but in food gathering, Oli competitions, (‘Olelo nane) quickest and sharpest of wit also. The games encourage camaraderie, good sportsmanship, and friendly rivalry. In today’s world the games are played not only to develop skills and quick thinking, they are played to instill pride in the Kanaka maoli culture and to keep that culture alive for generations to come.

Makahiki games still exist today and are played at cultural events on Hawaii and the mainland, although the purpose of the games has switched from preparation of war to the perpetuation of Hawaiian traditions.

Makahiki lives through the efforts of such people as Paul “Hiapo” Hiapomalulani Elderts. His passion for honoring his Hawaiian culture drives him to participate in many of the ho’olaule’a throughout California, Nevada, Oregon and Washington. He can typically be found teaching children and adults about the benefits of makahiki – from physical training, to education, and even pure enjoyment, proving its relevancy even in these modern times. If you are interested in learning more, or would like to participate, please contact Hiapo by email at hiapomalulani@hotmail.com.

The following is a small selection of user photos of makahiki games from previous ho’olaule’a. If you would like to submit your own photos, please send an email to heather@heleloa.com. 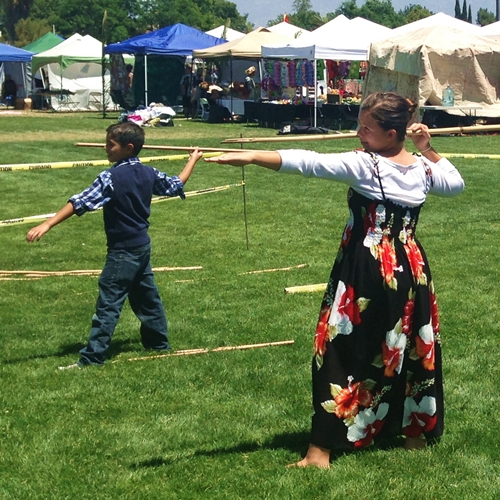 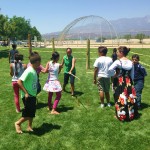